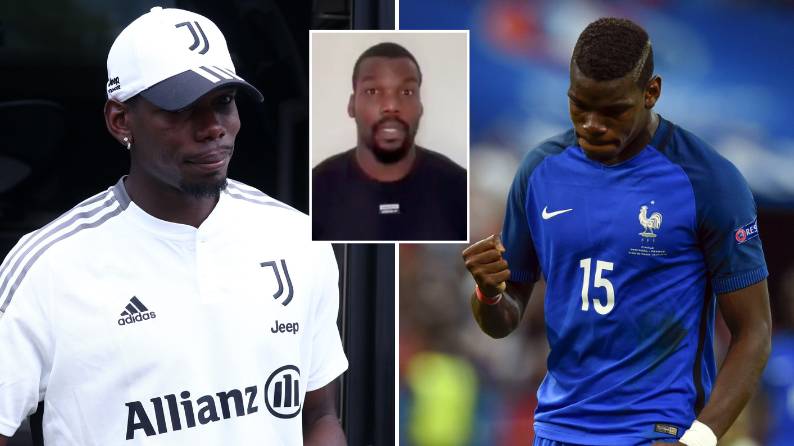 Mathias Pogba has made a series of new accusations against his brother Paul Pogbaincluding strange statements France international used a sorcerer to summon ‘butterflies’ in the Euro 2016 final.

It’s unclear when the videos were filmed, but it may have been before Mathias turned himself in for questioning earlier this month after police launched an investigation into the alleged extortion attempt.

In the videos, Mathias repeated his claims that Paul had used a witch doctor for several years during his career.

He claims Paul became a follower of a witch doctor close to his former French teammate Alou Diarra, after being introduced by Nottingham Forest right-back Serge Aurier, Get French Football News reports.

SPORTbible has contacted Paul Pogba and Serge Aurier for comment.

He repeated his claim that Paul has used the witch doctor to cast curses on opposition teams and even his own teammates, including Kylian Mbappe.

Mathias said Paul asked the witch doctor to help him win crucial matches, including the Euro 2016 final between France and Portugal, “where strange things happened, like the swarm of butterflies before the match.”

The match, which was eventually won by Portugal in extra time, was interrupted by a swarm of moths that were attracted to the Stade de France by the stadium’s floodlights.

Earlier this month, French prosecutors opened an investigation after Paul told them he was the target of a €13m (£11.3m) extortion scheme by an armed gang that included his brother. .

“The whole world, as well as my brother’s fans, and even more so the French national team and Juventus, my brother’s teammates and their sponsors deserve to know certain things,” said Mathias Pogba.

Paul’s camp quickly released a statement in response to the video, alleging that the midfielder was being targeted in a blackmail plot.

The Juventus midfielder is believed to have told authorities he has been the subject of threats and extortion attempts by friends he has known since he was a child, including his brother.

He cited an alleged incident in which he was intimidated by two hooded men carrying assault rifles in a Paris apartment, who demanded 13 million euros.

Pogba also told investigators that he has been bullied several times since then, with the gang allegedly turning up at Juventus’ training ground in July.

The group is said to have demanded the fee for “services rendered”, claiming that they had protected Pogba for 13 years.

Mathias was charged earlier this month in connection with the alleged plot, while four other men were placed under formal investigation for racketeering and racketeering.

After he was detained, Mathias’s lawyer, Yassine Bouzrou, said his client is innocent, telling French broadcaster BFMTV: “We are going to challenge this decision.”